A bit of research


Since I got back from the UK last year I haven't done any weaving. I am not sure why not; it just seemed that nothing was interesting enough to justify the effort. I was still interested in weaving and read various bits and pieces and did some designing on my weaving software but ennui set in whenever I contemplated actually doing some work.
.
Whenever Handwoven bring out electronic versions of their magazine I buy them so I now have every issue from 1988 to 2015. I was browsing through some of the older ones when I was rather taken by the front cover of the Nov Dec 1988 issue and the corresponding pictures inside on some scarves by Juanita Girardin. There were no drafts in the issue, just the information that they were in plain weave with an 8 shaft supplemental warp. 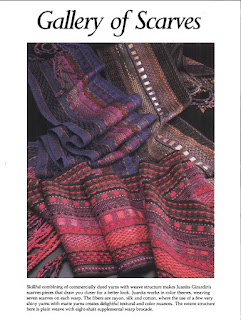 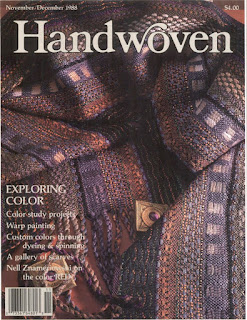 The world wide web is a wonderful thing so I soon came to this page with loads of examples of Juanita Giradin's work. Lassitude was dissipated and I read everything that I could on supplementary warp/brocade.
I looked for as many examples as I could; the majority of the articles in Handwoven were by Barbara Walker and her site has some lovely examples of what can be done with supplementary warps.

I took the photograph of one of the scarves and reversed engineered it to produce a draft. I used pixeLoom to produce the draft and WeavePoint's excellent  fabric view to check my work. . These are the notes that I made at the time.


Contemplating Juanita
The following  observations are based on what I think that I can see from looking at photographs of some of the works of  Juanita Giradin.  My interpretation could be completely wrong! Think of scarves of this type as being turned Monks Belt with a bit of Turned Overshot thrown in for good measure.
The body of the scarf is balanced plain weave. The warp and weft are both dark (black?) but there are areas where the warp is paler or alternating  pale and black.
The supplementary warps have a variety of interlacements and different yarns are in use.
In certain areas I find it hard to tell if the pattern is coming just from the ground weave or is from a supplementary warp.


The three pictures below are of the original scarf, the my interpretation as a draft and a graphic representation of the draft.


Now, I have a Glimakra Standard with an additional back beam that I have often admired but never used. Time to get going again I think.

Comments are most welcome